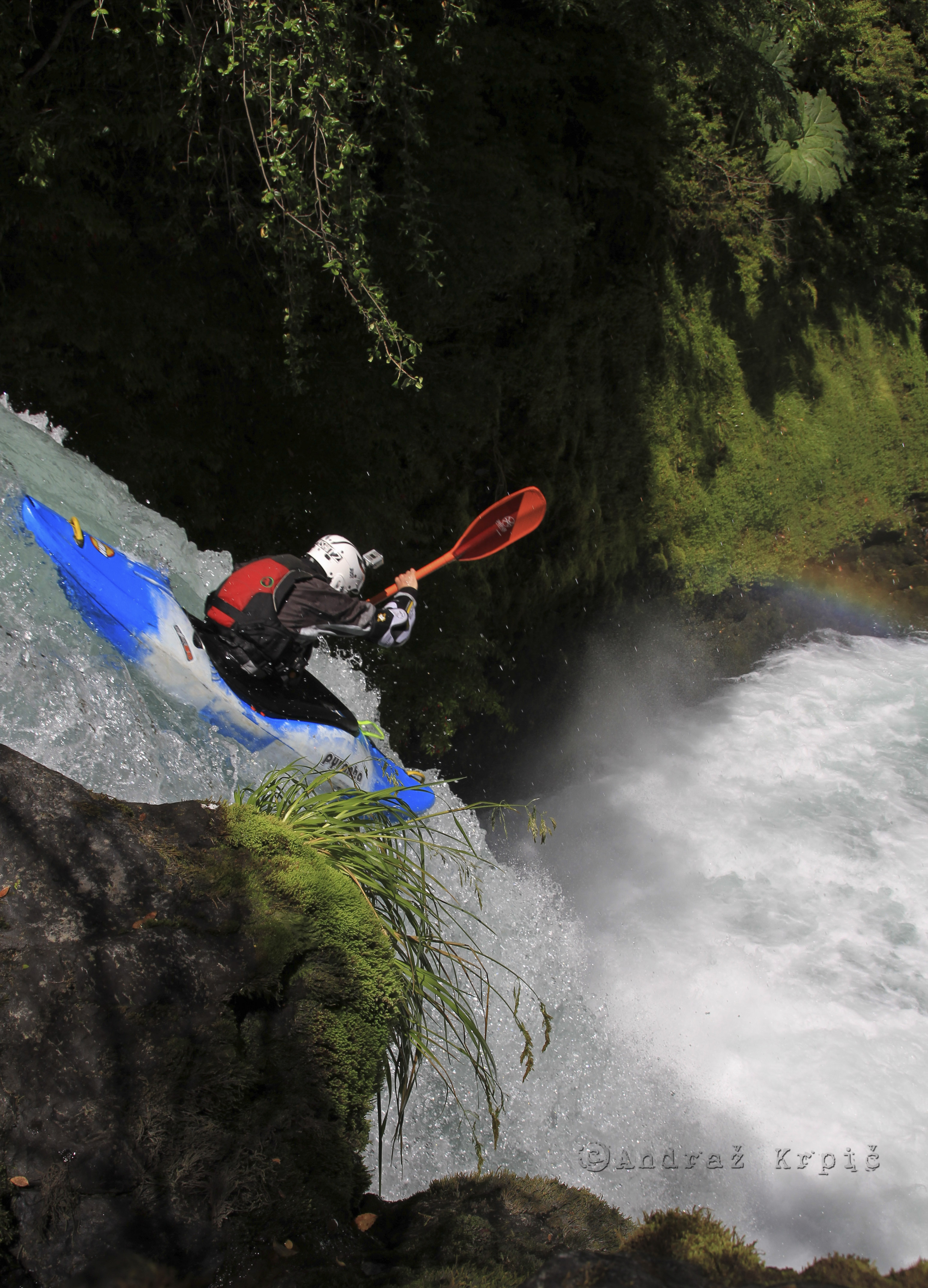 Jared Seiler dropping the “Suavemente” aka “Purty Thirty” at the start of the Lower section.

The Rio Llancahue located on the southeastern slope of Volcan Villarica is reached via Conaripe.  It is roughly an hour and a half drive from Pucon. It is easily found by following signs to the famous hot springs “Termas Geometricas”. The upper section is a well known classic class 4-5 creek run that was first descented by John Foss and Zack Cowan in 1995.  The upper section is most frequented by boaters and is a warm up run compared to what lurks downstream.
The middle section, contains some unrun rapids and is usually skipped for an easier take out option for the upper section located where the road is first visable from the river, after the “class 5” rapid, often portaged river right during high water due to a must make eddy at the bottom.  Anyone who has run the middle section usually parked their car at the Termas Vergara, there is an unrun rapid you want to get out above.  The middle is considered a “park n huck” to the daring ones with intentions of running the biggest drop on the river which also marks the end of the middle section… or now… maybe the beginning of the lower section, and is arguably the most bad ass 60′ waterfall in Chile. The drop is called “Gerd’s drop”, first descented by Gerd Serrasolses in 2006. It has since been run by only 6 other huckers. Immediately following this monster drop is one of the cleanest 30′ waterfalls in Chile, called the “Suavemente” or the “Purty Thirty”. In the past when boaters would run this drop they would climb back out of the gorge in fear of what may be around the corner due to a diffucult to scout gorge that appeared to be unrunnable. Numerous groups throughout the years peered into the canyon through dense brush and steep cliffed walls, but no one ever mustered up the courage to drop in to this unknown.

Until, December 23rd 2011 a group of 5 brave kayakers, Jared Seiler, Evan Garcia, Ian Garcia, 3 of the 7 who have run Gerd’s drop, Jonny Meyers, and Anton Immler decided it was time to drop in for the first descent of the Lower section. Before dropping in the crew researched the section with Google Earth and found the run to be 9 km to Puente Llancahue, with the steepest part of the run being in the first 3km, in total dropping over 400 meters of gradient. Roughly 200Fpm, with the steepest 1km at probably around 400fpm. They figured if they could get through the first 1 km they could expect a gradual tapering off of the steep gradient. The day before the mission a crew led by Jared Seiler scouted most of the first 1 km after the “Purty thirty” which proved the findings from Google Earth to be the steepest and most continuous section. What the crew found was very promisingly runnable looking slides and waterfalls stacked between tiny catchable eddies and a potentially portageable left bank at a seemingly perfect water level. Jared informed the boys of the epicness of the run and made plans to drop in the next day. Coming from Pucon in the morning the crew put on below Gerd’s drop at 2 in the afternoon on a bright sunny day. Starting with the “Purty Thirty” they got out to scout on the left. A runnable 15′ first slide to autoboof put them in a must make eddy before a very continuous looking section. On the 2nd descent a boater missed this eddy and was forced to run the succeeding drops blind…The boys spent about an hour scouting an approximately 200′ long slide with a technical 2 part lead in rapid. After much debate Jared Seiler decided to go for it and ran the entire slide cleanly until spinning around backwards and flipping in the last 20′ of the slide. After a quick roll and celebration he caught the small must make eddy on the right at the bottom before another long slide. After a thumbs up, Evan Garcia and Anton Immler followed Seiler’s line with a little carnage of their own, but mostly cleaned it. Ian and Jonny opted for a seal launch half way down the slide which slightly tamed the rowdy beast. The lead in drops to this slide become worse at lower levels and a boater was badly pinned on a separate descent a week later in the lip of the first drop for over 20 minutes before he could be rescued. The entire slide can be portaged on the left. Seiler decided to call the slide “La Longaniza”. 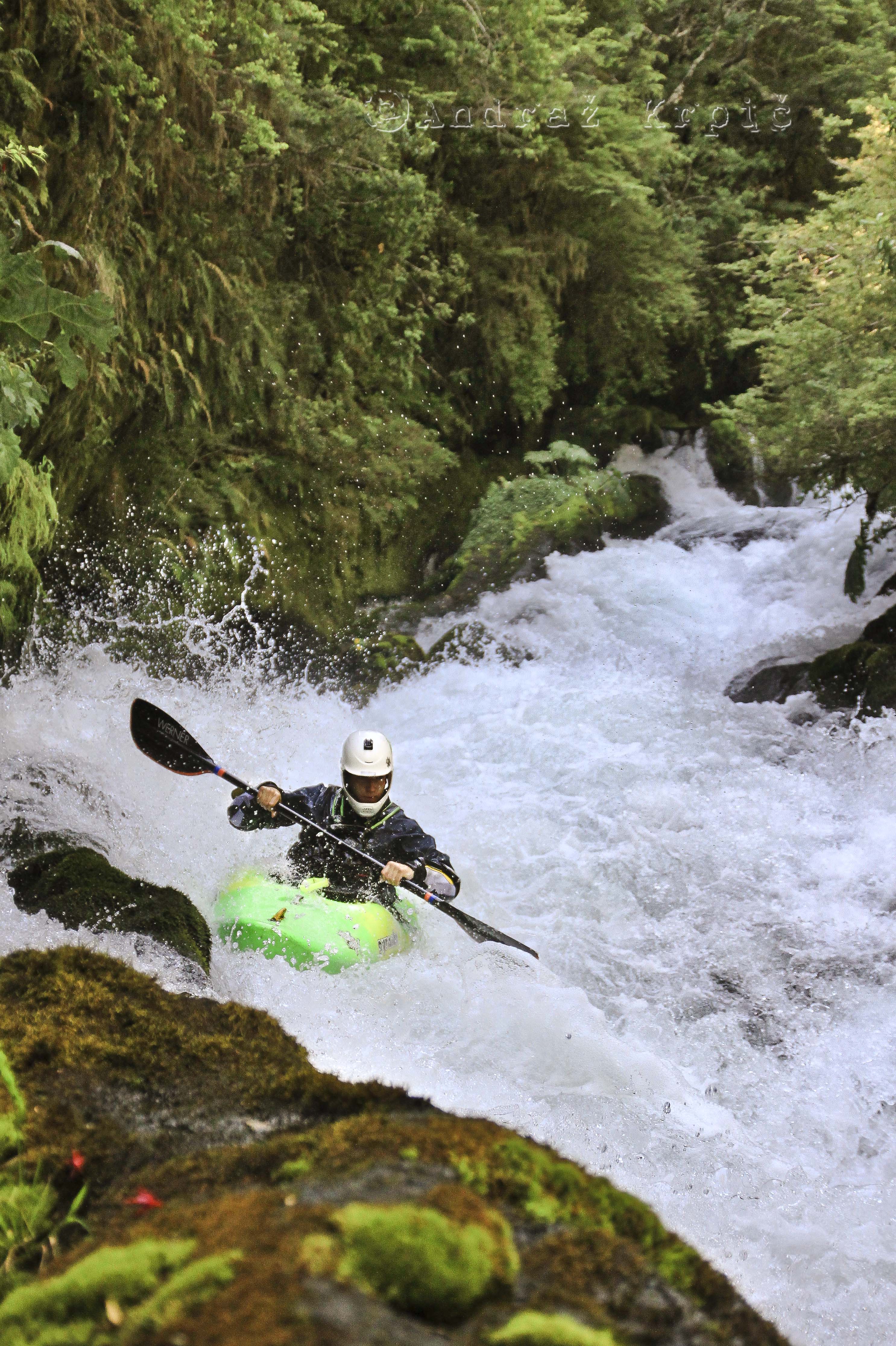 Graham Seiler running the bottom half of  “La Longaniza”

The crew briefly scouted the next slide which they ran down a left channel where the river is split by an island with both left and right channels looking runnable and the crew chose the left which ended in a 15′ waterfall. The line turned out to be pretty stout and was named “Survivor slide” aka “fight club”. The right channel has been run since and is equally challenging.  Immediately following the 15′ waterfall the crew caught an eddy on the left above the last slide of the steepest section where their shuttle driver awaited with a rope in case someone was swept into the last slide that ended with a heinous hydraulic and boxed in walls. The crew called this one “the Gambler”. This drop has since been run. A short pool led to the start of a section later named, the “Quality and Quantity” section which begins with a 6′ boof run down the middle then a series of 2 class 4 boogie water sections broken up by a calm section and proceeds into another continuous rapid which Evan nearly ran blind before catching a small eddy to have a look. Good thing because this rapid had one of the ugliest siphons on the run followed immediately by a 6′ weir hole. Evan ran a clean line down the left and boofed the hole in the middle. The siphon on river right was later named “cancha tomate” and the following weir hole “wachito culiado”. Best scouted and portaged on the right. Small eddies on either sides afterwards allowed a set up to run the next 6′ horseshoe hole boofing right of center named “puta la wea”. Continuing mostly down the left through class 4 boogie you come to a drop run left under two big old growth logs perched in an A-frame position. Another half a km brought the crew to a narrow slot boof into a fairly large pool marking the end of the “QQ” section. Continuing roughly a half a kilometer you come to a rapid where the water ramps off the left wall through a fluffy hole. More boogie arrives at a manky slot rapid portaged on the right. Potentially run right. More boogie gradually mellowing out brought the group to 2 stout looking converging channels dropping into a big hole partially backed by a boulder on the right. Scout and portaged left. This drop was later run on the 2nd descent down the left channel and was named “the shitter” upon finding a toilet seat lid at the bottom 🙂 The river continues at a fun pace and gradually goes flat. At this point the 1st crew thought they were finished with the run, but 4 more 15′ drops awaited downstream along with a landslide that diverted the river through a forest! The first 15′ after the “false run out”was only run by Evan on the first descent where a bad line on the left through a manky pile of rocks coined the name “ass banger”. Jared ran the drop on the 2nd descent with a more thought out line that turned out better off the middle clearing the rocks in the landing zone. More boogie water leads quickly into the 2nd of the last four 15′. Called “el nombre de mi polola” or “La Pacha Mama” one of the best drops on the run. A stout lead in down the left splits two directions with both 15′ drops on either side proved runnable. Big logs piled in the middle between the two falls characterizes the drop. This drop is difficult to see coming and is best scouted by scraping over a far right channel into a small eddy on the right. This drop may be mandatory, but if you feel the need to portage you probably shouldn’t be on the run. Wood could be an issue in this drop in which case a throw and go portage from the logs could be done or maybe hellish bush whacking through the woods on the right would be the best option. Soon after this falls is the landslide forest. Run cautiously through a maze of trees and strainers on the left. More boogie…seriously very little flat water on this run, brings you to a super gnar 15′ falls into a tunnel like siphon on the right, run only by scraping down the FAR LEFT, as far from this potential boater swallowing siphon as possible, one of the nastiest siphons I’ve seen! More boogie water leads to the last drop, 15′ down the middle boof with a possible plug line on the left. Dubbed the 4.20 drop.  Finally, finishing off with 2 km of shallow run out to Puente Llancahue. A gauge for the run can be judged by the middle bridge embutment 3 inches showing on the river right corner of the lowest concrete slab is optimal.  If water is over this the run will become very dangerous due to washed out eddies. The first descent was done in a very low water year in late December. During a regular season I would imagine this section will be runnable in late January. The river holds water very well and if you think it may be too high don’t go!!! (I believe higher water descents will be possible in the future- but not unless you know the run very well-as you will not be able to stop in some of the steep sections).  You can also judge the flow at the put-in by looking at the lip of Gerd’s drop. If water is spilling over a right channel at the lip it is probably too high. This run requires class 5+ skill level with exceptional eddy catching skills. Arguably, the stoutest steep creek run in Chile! Cuidado mother F@*&er$!!!
photos taken by Andraz Krpic

Check out this video with the 1st Descent

One Reply to “Rio Llancahue (Lower)”