Meaning rainbow in local language the Huepíl is nailbiting run through an overlooked part of Chile´s 8th region… The river would normally have paltry flows in summer months but due to hydrological rerouting water from both the Rio Molcho and Rio Laja are diverted into the Huepíl to supply the agricultural needs of central Chile. 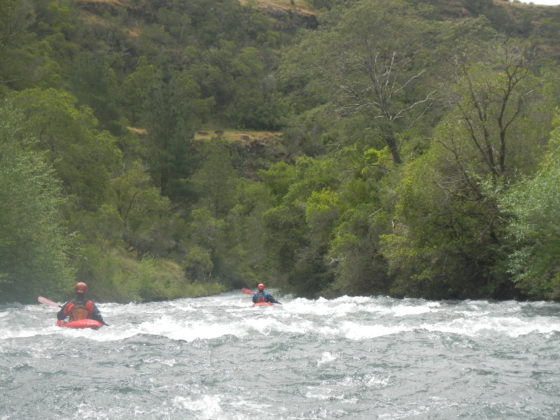 The put in is reached by going east from Huepil on paved road to town of Trupan (meaning Paso del Leon). From the village of Trupan turn north  on the westernmost part of town at a large white building and follow a winding gravel road for 1 km until arriving at a bridge over the canal bringing water from the exit of Laguna Trupan. Start at this bridge or continue downstream another 500 meters until the confluence with the upper Huepíl. The locals refer to the this area as El Molino.If you cant find it ask the Caribineros in Trupan. They came with us and showed us how to get to the river.

Immediately upon entering the river rages into an overgrown canopy of Sauces and Arrayanes with pushy whitewater, few eddies and difficult portages and scouts

Fields Mashall Scouting the whitewater under the jungle canopy

2 KM into the run you will reach the Salto de Leon which is an impressive lead in rapid into a slot canyon that squeezes down to 1 meter. Locals say it was here that Puma used to cross the river. 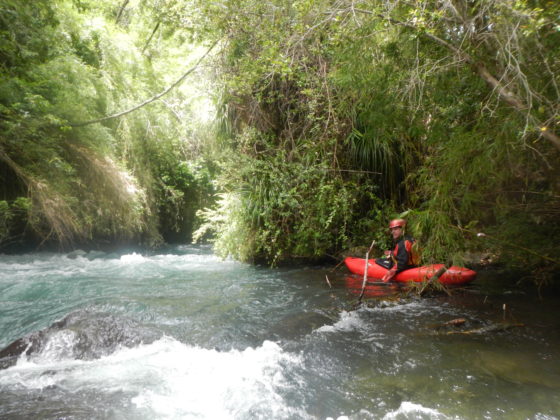 On our first descent we aborted 3 km into the run and climbed out on river left up through a cliff band and eventually reached a planted Eucalyptus forest and finally the paved road. We were told we had reached a place called La Obra and that from where we bailed out the river completely mellowed out for remainder of 7.5  km course into town of Huepil.

Other nearby rivers include

Note: This run is more dangerous than it is fun….By the time of this reading it likely no longer exists anyway…We were told a plan was well under way to send the complete flow of the Huepíl through a pipe and generating station