I have trouble recommending the Río Colorado. On one hand it is one of the closest rivers to Santiago with an almost guaranteed strong water flow, paved roadside access and solid class IV rapids but on the other hand it is dangerous with very dark silt-laden water.

If you plan to run the river my biggest suggestion is to carefully SCOUT from your car before you put on. Have a plan and know exactly where you will take out and where you will portage. 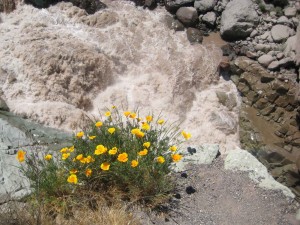 To get to the river from Santiago simply reach “Las Vizcachas” at the mouth of the Cajon de Maipo and proceed upstream. A few KM after the town of El Manzano you will reach Puente Colorado. Just prior to the bridge is a dirt road that goes upstream 1-1/2 km to the Instituto Río Colorado. Here an ancient bridge over the river collapsed and a massive boulder rolled into the river creating the lower death trap sieve we call # 1. If you plan to boat this far carefully plan exactly which eddy you will use to get out and portage horrible sieve. At strong water flows you will need to exit at least 300 km upstream as no eddy exists on the approach. 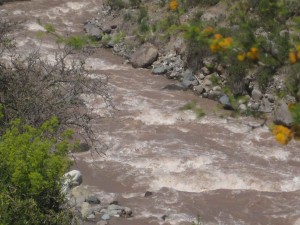 To reach the put-in return to main road and cross Puente Colorado. A few hundred meters on the other side is a paved road turning to the left. Follow this road and proceed upstream. We put-in about 1 KM above the town Los Maitenes or 23 km up the paved road. We put in just after crossing the second side stream bridge above the town of Los Maitenes which was also first good place to make the 5 minute walk to the river and it was just after crossing under some hydroelectric pipes coming off the mountain.

Our trip abruptly ended at upper death sieve # 2 which is 12-1/2 km below the town of Los Maitenes or 8.7 KM up the paved road from the Maipo canyon. We never scouted this area from the road but should have. The river was running high with full springtime runoff (November 2, 2008). We had just run 13.5 KM of mostly class IV-IV+ boat-scoutable whitewater when we came to a curve in the river with nearly vertical rock walls. The mistake was boating too far and catching an eddy on river left. From here we could not get back upstream nor could we get out to scout what was downstream. The ferry to the other side of the river involved a tight angle thru pushy current and avoiding a juicy hole. One person missed their ferry and got pushed downstream into what turned out to be death sieve # 2. The whole river is blocked by boulders with a large river wide ledge hole just upstream. Our unfortunate boater got pummeled in the ledge whole then proceeded to swim thru the sieve. He survived but the boat and paddle did not. He wound up alone in the canyon amongst its vertical walls. We could not reach him until returning upstream, crossing river, walking up to road then walking downstream on road until we could rapel into canyon to set up belay for climb out. In all it took 4 hours. This could have been avoided if we had scouted the river from the road. The sieve canyon lies just downstream of a campground owned by Luis Vergara Martinez at KM 8.9 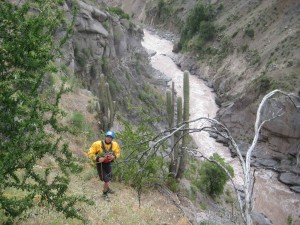 Ben May Rapeling into canyon 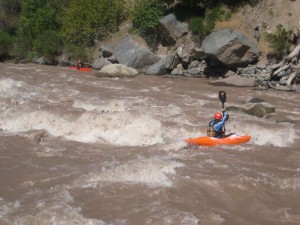 One Reply to “Río Colorado”