Flowing off the southern side of Volcan Llaima (3125 m) is one of the best class 3 runs in Chile. The crystal clear waters cascade through lava fields at a breakneck pace while the surrouning snow peaks are fringed with Aruacaria trees making for an exciting and beautiful trip. The river name is derived from a Mapuche word and translates as Waterfall-Waterfall. Sandwiched between two National Parks Conguillio and China Muerte, the river traverses through some impressive terrain before joining the Allipen for its westward journey to thePacific Ocean. 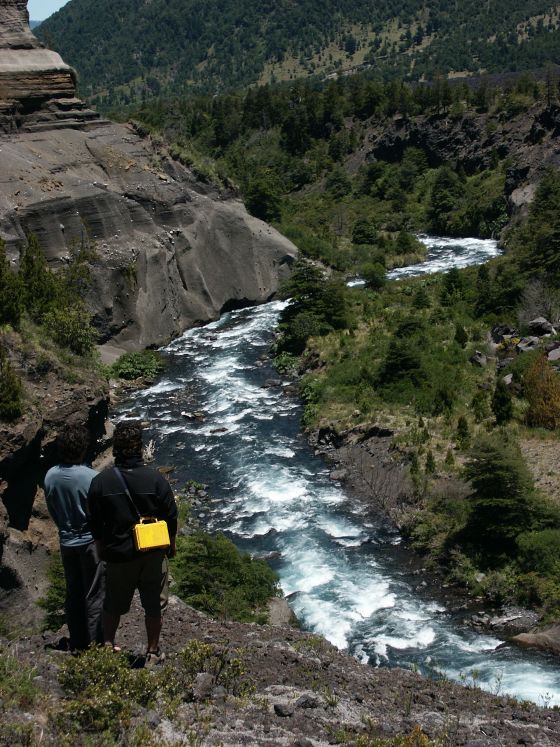 Scouting for a way to the Truful Put in

To reach the put in you have two options. The fastest is to travel west up the Allipen Valley to Melipeuco. From here it is only a few KM east to the turn to Parque Nacional Conguillio and afew KM up to the park gate. The other option is to come in from the North and pass up and around Volcan Llaima thru the national Park. It is a breathtaking drive and well worth the time if you are in the area. You can leave your vehicle at a parking area on the south side of the National Park and walk across the street to a foot path high above the river.

You will need to walk a few hundred yards downstream until you reach a point where you can down-climb down to the river. The river is fed mostly through subterranean sources percolating up through the lava so remember that even though you will see no tributaries the river will continue to grow as you move downstream. The first rapid might be considered class 4 but thereafter it is several KM’s of continuous wave train class 3. The takeout for most mortals is at the lip of the “El Trufulizer”. Woe to those who miss this eddy. What follows is a long class 5+ rapid culminating in a 8-10 meter falls with no chance of eddies in between. The rapid has been run but usually at minimal flows during late summer. No matter what the level is the drop is class 5+/6 so scout before an attempt. Otherwise this is a good takeout point. 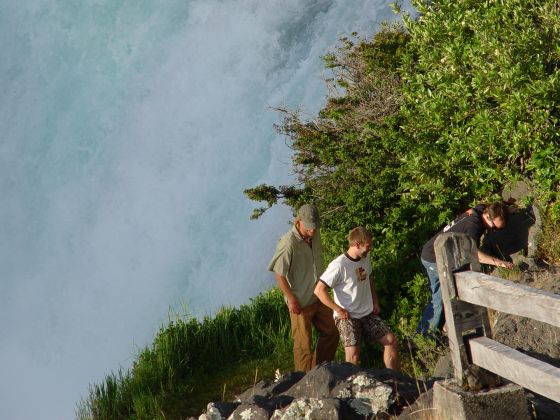 To reach the takeout a vehicle should be driven from the park entrance back down the road to Melipeuco. Instead of turning right turn left (east) and cross the river on a bridge. You could take out here but a preferred takeout is reached by continuing a few hundred more meters on the road and turning left. This road goes up and in less than 1 KM you will come to a parking area for Salto Truful also known within the kayaking community as “El Trufulizer”. The shuttle is 10 KM and the kayak (also good in raft/shredder) run is just under 9 KM. The season is pretty much year round with optimal flows of 700 to 1500 CFS found in December-February.

Other rivers in the area are the Cautin, Queupude, Quepe and Alpehue. It is also only a two and a half hour drive to Pucon and not far to cross the border to reach the Alumine. Camping in the area is excellent.