The Rio Desagüe (sometimes called Rio Carburgua) is another spring run in the Pucon area. In high water years it has water into early January but in low water years it can be gone by December 1st. the river is a tributary of the Liucura and its waters eventually enter Lago Villarica in Pucon. On a lower stretch of the Desagüe below the takeout the Rio Carhuelo enters from river right. At low flows the river is an easy class 5 introduction to waterfall running but at higher flows is an ornery class 5+ boatbuster. 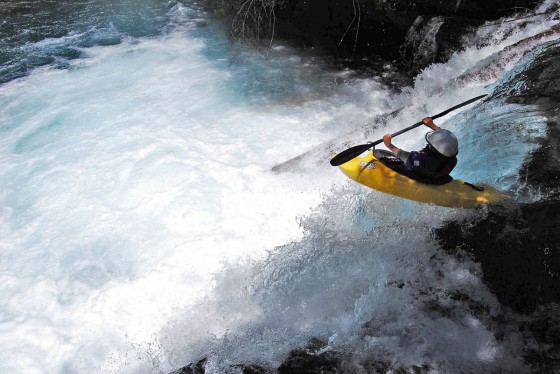 The river is a unique occurrence I have not seen anywhere else in the world. Water from the surrounding snow covered peaks called Picos de Carburgua enters the beautiful yet shallow Lago Carburgua. The bulk of the water exits the lake through a subterranean aquifer and emerges 7 km downstream at the waterfall/tourist attraction called Ojos de Carburgua. When the exit is very full there is a natural overflow channel carved out of basalt. This 7 km long river channel goes completely dry in the summer and can be thumping in spring. The water is warm and crystal clear but do not let the beauty deceive you. The drops are big and with high water very pushy and the rock is razor sharp. 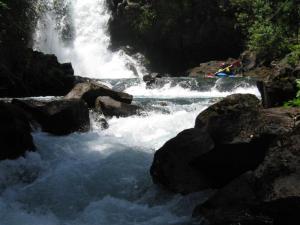 The window to run the river can change very rapidly but generally Late November and first weeks of December are the spring season.

Yvon Chouinard, Royal Robbins, Doug Tompkins and John Wasson first ran the river on January 27, 1984. The river then lay dormant until John Foss and Arnd Shaeftlein rediscovered the river in January of 1994. I was on the third trip (first high water) in early December 1994 with Clay Wright and Josh Lowry. To the delight of visiting tourists Clay finished the run as the first person to ever launch the 10 meter falls at the Ojo de Carburgua.

Today the river is run often and at high levels by the likes of local hairboaters Rodrigo Tushner and Ben May.

One can put in at the lake and paddle into the swift moving river at the exit. To reach the put in follow the paved road from Pucon to Carburgua (15 minute drive). Upon reaching the beach you can turn right and drive down a side road until you reach the Desagüe. One KM of fast moving flatwater follows before the river steepens to 45 m/km. An optional put is one KM down from the lake at a small wooden bridge. From the paved road this bridge is on 50 meters down a small road made obvious by the wooden/wire fence found at the entrance. From this point onwards the action is relentless with countless drops ranging from 1 to 10 meters in height. Most people will choose to portage Salto Mortal found halfway into the run. A good portage trail exists just above it on river left. If you choose to run the drop plan your line carefully. Robbie Dastin once ran what appeared to be a perfect line only to enter a subterranean pothole at the base of the falls. the water coming down on top of him held him in this underwater hell hole until his kayak broke in half and he was able to claw his way to the surface.

Sometimes you will be asked to pay to park your car at the Ojos de Carburgua. Another optional takeout is Puente Cristo 1 KM upstream from the Ojos. There is an obvious turn to Puente Cristo off the main paved road. You can take out at this bridge but the climb out is a bit tricky. The river is only 20 meters below the bridge but you need to climb up the banks on river left 100 meters above the bridge and cross over a side stream in order to reach your car. 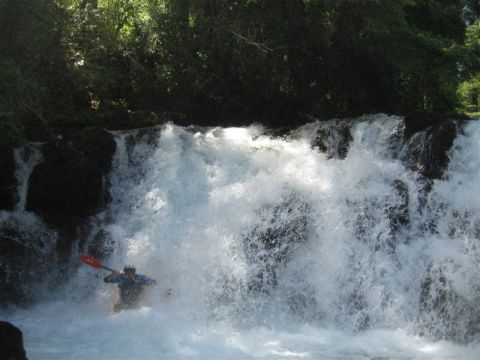 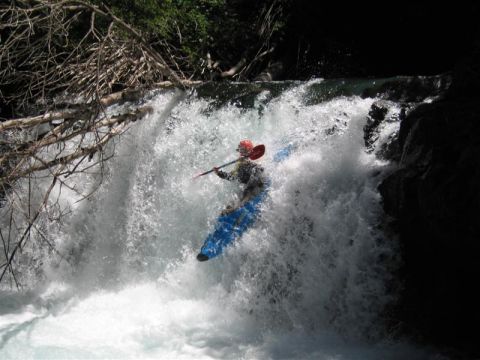