The Class 5 Baker is one of the world’s premier big water runs. Set in a remote arid location in the XI Region of southern Chile, the Baker drains Lago General Carrera. The lake at 590 meters depth is the deepest in South America and the 7th deepest lake on earth. The emerald green waters are even more pristine in color than the Futaleufú and are reached from the Futa via a 16 hour drive down the Carretera Austral.

The actual volume of the river is somewhat of a mystery but I would estimate it to be 25,000 to 50,000 CFS with high runnable flows being in January with volume gradually diminishing into end of April.

It was not until 1992 with construction of the road that the first boaters arrived at the Baker. It was a Sobek exploratory raft trip with two safety kayakers. The rafts were quickly pummeled and forced out of the canyon but kayakers Rocket (David Pettingal) and Chuck Carpenter made it to the the entrance of the third canyon and portaged their way through. 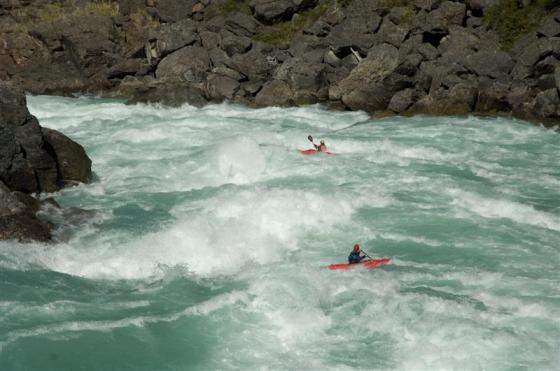 The waters of Lago General Carrera flow into Lago Beltrame and the exit is the nacimiento or birth of the Baker. Snow capped peaks surround the region and world class fishing make for outstanding scenery and provide many other activities in addition to running the river. 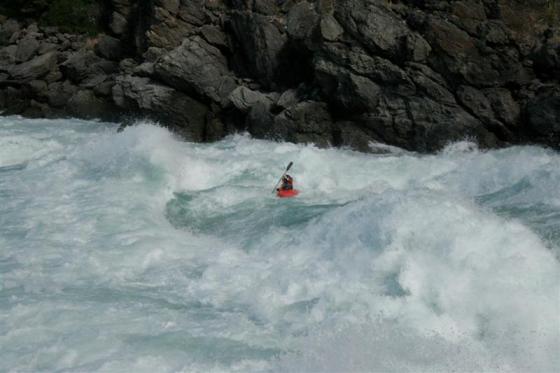 One can put on at the end of Lago Beltrame and boat the birth of the river. There are a few big volume class 2-3 rapids but nothing serious. 4 KM downstream, just across from a nice camping area called Predio Eva, is a nice playwave with eddy service. 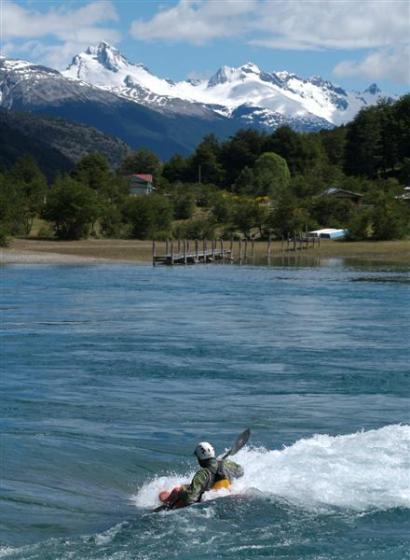 Below the surf wave it is 8 km of flatwater down to the Salto Nef, a two part drop consisting of a 3 and then 4 meter falls. This falls are visible in the distance from the road but can be accessed by walking just under 1 KM from the sign and gate called “La Confluencia” down to the falls themselves. 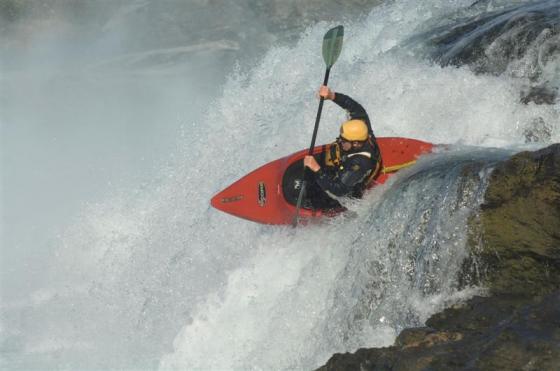 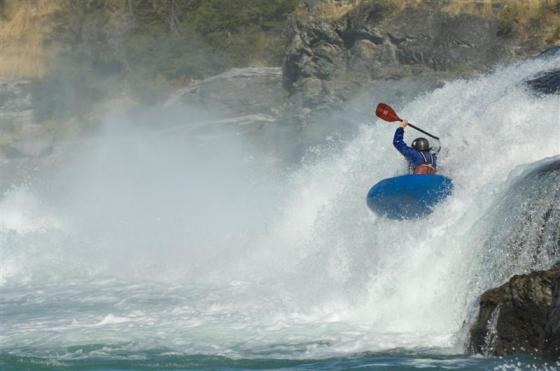 Below the falls the Rio Nef joins the baker significantly bumping up the flow and changing the turquoise waters to a turbid green. A long pool leads directly into the fits canyon. The four distinct rapids can all be scouted and with some major efforts even portaged. The rapids are enormous exploding wave trains peppered with monster holes and unforgiving, surging eddy lines. The third rapid in the first canyon has consequences above and beyond the others with the bulk of the river smashing into the right had wall creating chaos best avoided by driving hard to an eddy on river left. 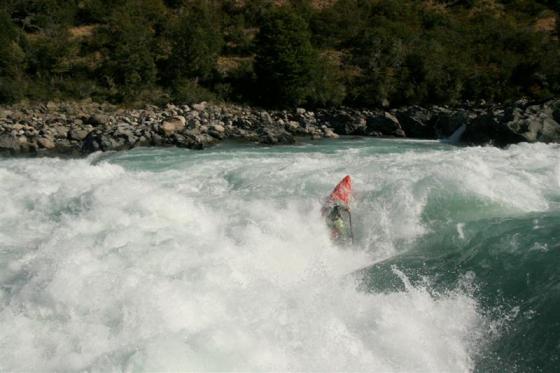 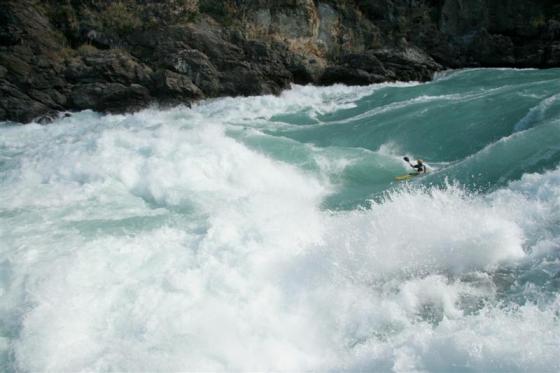 Big water on the baker

At the exit of the second canyon a Pasarela (bridge) crosses the river providing a good takeout point or for the big volume playboaters access to perhaps the best playspot in Chile. Just below the bridge is a massive playhole that exists and morphs at all levels. 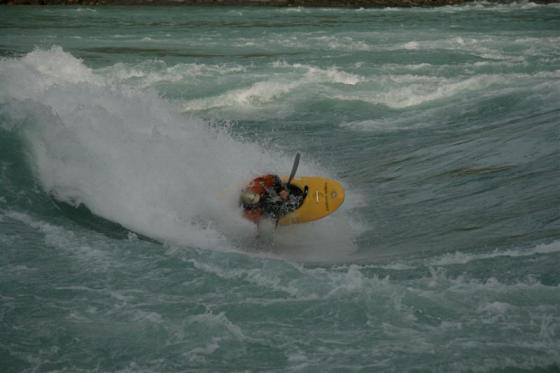 Downstrean is the third canyon which was not run until January 1996 by Josh Lowry, Arnd Schaeftlein, Bernd Sommer, Manual Arno and Dave Kashinski. The canyon has six rapids, the second of which is often portaged. A kilometer of turbulent water seperates the fourth rapid from the unportageable fifth. At the exit of the canyon the Rio Chacabuco enters on river left. There might eb a way to takeout here but continue downstream to Balsadero Baker which is 16 KM downriver from Balsadero Nef.

At the abrupt exit of the third canyon is the planned site for one of Chile’s more controversial damm sites. At the time of this writing no construction or other noticeable activity has taken place apart from several billboards encouraging a Patagonia free of damms.

Signs against the damm near proposed construction site

A great write up on the Rio Baker by Evan Garcia found here http://egcreekin.blogspot.com/2008/03/rio-baker-trip.html