The Queupude along with adjacent river the Alpehue both flow off Northern side of Volcan Solipulli and along with Rio Truful-Truful eventually merge into the Allípen. In early January 1995 I drove up this drainage with John Foss, Clay Wright and Josh Lowry. What we found was a pair of the strangest kayak runs imaginable that had also never been run before (and to my knowledge have not been paddled since).

The Alpehue and Queupude are both glacial creeks that come together to form the lower Rio Alpehue. Just before their confluence each creek passes thru a subterranean world. More specifically each creek enters a canyon approx 200 meters long which is actually more of a tunnel as the walls touch above and the daylight is choked out. Plants and bushes grow on top of each canyon to make them feel even more foreboding. 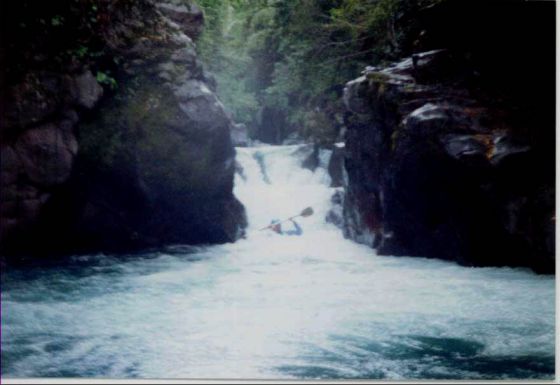 Scouting the tunnels was really difficult as there was no way to easily see what was inside the enshrouded walls. None of us wanted to go first but after much nail biting Josh charged in and found an eddy where we could see him and he could see downstream. At the exit of the Queupude tunnel there is a 4 meter falls before joining the Alpehue We named the falls Salto de Renacimiento (rebirth) as coming out of the tunnel felt like coming out of the womb. We started by running the Queupude tunnel and then repeated the process with the Alpehue branch.

Each creek had about 150-200 CFS and although they both looked terrifying they were in fact both class 4 with only one or two portages.
From Melipueco cross Puente Truful-Truful heading east and continue a few hundred meters. Take gravel road to the right and continue up the Alpehue drainage for approximately 7 KM until the confluence of the two drainages. You will loose site of either branch of the river but you will hear them. Leave your car at this point and stumble around until you find both creeks. They will actually be directly beneath you passing thru the tunnels. Scout both the entrance and exits to each tunnel before committing to run them.

Then continue upstream to start on both branches. The Queupude can be reached by walking up road another ¾ KM to the yellow house. From here a trail leads down to the river and it is a ¾ KM creek run thru narrow slots and canyons until you come to the tunnel.

The Alpehue has same logistics to reach its put-in. Shoulder your boat and head upstream. This put in for this tributary has a wild section of basalt S turns before reaching its tunnel.

Below both tunnels the river is worth paddling another 4-1/2 KM to an arbitrary takeout thru some cow fields. Although the final 4-1/2 KM has flat water you will encounter one very unexpected class 5 screamer.

The average gradient of both creeks is 158 FPM (30 m/km). The water is ice cold and gray from glacial sediment. These two creeks are a good compliment to nearby Truful Truful. 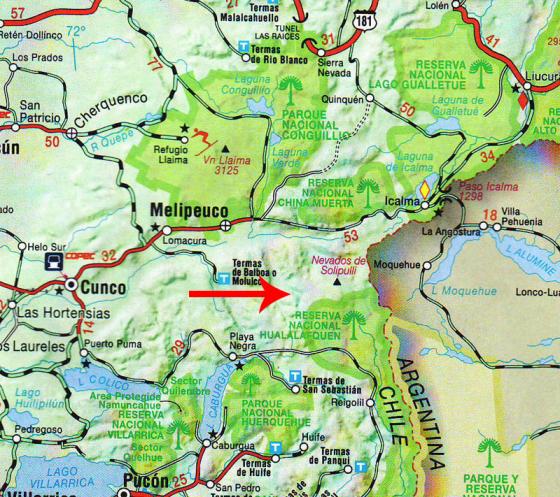