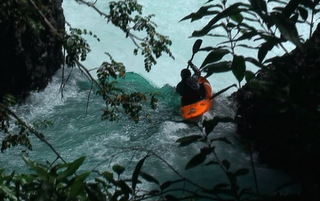 Rio Rininahue is just down the road from Salto del Nilahue. It also flows into Lago Ranco. Usually, this river has extremely high flow for its micro gorge character all summer long. Best run very late summer. 1st descented February 2008, which was a low water year, by myself and Evan Garcia. We estimated about 500 cfs in the gorge and thought the upstream drops were still too high to run. We ran a 12 ft powerful drop with a scarey cave on river left in the lead in landing in a large bowled out room. The next and final drop is a 25 foot drop with a lead in ledge that fires you into a curl coming off the right wall that you smash into and plug into a deep pool.

компютри втора употребаEvan Garcia on the last drop-we called Alerdio- because of its resemblence to Salto de Indio on the Gol Gol mixed with the Salto de Alerces on the Manso in Argentina, just a little smaller than both.Here are pictures of some drops, above the two we ran, still up for grabs on the Rininahue. Watch out for the nasty undercuts on this run, they\’re everywhere!1st drop-rininahue3rd drop-rininahue